“We are constantly connected with the world and the price we pay is that we interact with it less, as we are increasingly less able to do so.” (Manfred Spitzer, 2012)

C. Wright Mills has instructed us that historical perspective and background next to the analysis and awareness of a representative sample of personal histories are the main resources in sociology, we tend to forget history and background when talking about computers and Internet. So when looking for the social impact of digital social networks, the historical impact of television and other electronic media is often neglected. When Internet started to spread in the mid nineties, television had repulsed community life already, largely pocketing face to face communication and impoverishing community life (Aric Sigman, 2009).

Computers, internet and consequently social networks first of all caused a shift in media use not necessarily an expansion. The big advantage of internet over television is its interactiveness. Users retrieve content that suits them, when it suits them. They can select themselves what deserves their attention and they are no longer bound to fixed programs. That way Internet, next to its liberating potential, clearly expanded liberty.

Phone calls, texts, emails, tweets and invites to befriend others, make us highly available and interruptible and often deprive us of precious moments to be by ourselves or to take a break. Interruptibility inhibits social contacts and community life.

This is not to say that electronic media use is good for our health, but when reducing media use it is to prefer to throw television and game consoles out of the door, not internet. Even printed media give more freedom than television and they leave plenty of room for processing information, mediation and contemplation.

Reducing overall media use is the first condition to revive community life and this can only be done by taking community life in our own hands, growing it attractive by making it a celebration and a feast. For that reason we must leave the beaten tracks and become creative again.

Electronic media use, loneliness and absence of physical contact

A study of the British Office for National Statistics in 2003 reports that Britons spend no more than 50 minutes a day interacting socially with other people. Couples spent less time in one another’s company then a few decades ago. Work takes over family relations and social relations. And even when at home members of the same family often spent time, using different media. (Aric Sigman, 2009, p. 14). Alone together as Sherry Turkle calls it.

How often do children still eat with their parents at the table? In the US only fifty-five percent of married parents and forty-seven percent of single parents eat breakfast daily with their preschool-age child. About forty percent of family food dollars are now spent on food away from the home (Jennifer S. Savage et al., 2007). Eating diner together is a small act and it requires very little, 45 minutes away from our usual quotidian activity, but it is an excuse to talk, to reflect on the day, and on recent events. It can be very satisfying. One in three Belgians live in single households (Algemene Directie Statistiek – Statistics Belgium, 2011).

Our disinclination for togetherness is only equalled by her veneration of communicating through new technologies. The arrival of the electronic age has fundamentally changed how much time we spend sitting at home and in other places. This change had been directly linked to an increase in health problems, such as poor nutrition, obesity and insulin resistance, which can lead to diabetes. These health problems increase your risk on developing coronary heart disease.

But there is also an additional factor heightening that risk, loneliness and lack of physical contact. However, the intricate mechanisms involved are only now being understood.

Coleman and his team were the first to find proof, that loneliness might have a negative impact on our immune system. Their research linked social isolation to global alterations in human gene transcription in leukocytes (human white blood cells) (Steve Cole et al., 2007). Further research of John Cacioppo and his co-workers confirmed their findings and specified that perceived social isolation rather than objective loneliness was to blame:

“Contrary to the notion that our ‘molecular selves’ are fixed across time and situations … is increasing evidence that changes in the expression of literally hundreds of genes can occur as a function of the physical and social environments we inhabit.” The important role of the human brain in modulating gene expression is suggested by the fact that people’s perceived social isolation rather than objective social isolation is more closely related to the observed differences in gene expression. The implication is that certain genes can be “turned on” and “turned off” by different perceived social environments. Given the focus on older adults, we have studied these effects in leukocytes, but the effects are theoretically meaningful—the perception of being on the social perimeter is related to changes in gene transcripts in the leukocytes that prepare the organism for assaults.” (John Cacioppo et al., 2014)

“Loneliness is being cited as causing low-grade peripheral inflammation which, in turn, is linked to inflammatory diseases such as diabetes, cardiovascular disease, and autoimmune disorders (e.g. rheumatoid arthritis, lupus).” 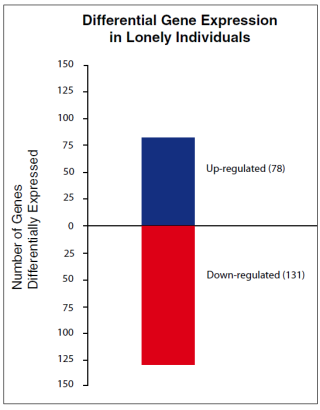 Next to these negative aspects of loneliness one must also consider the positive effects of physical contact. Somatosensory stimulation, hugging, touch, warm temperature release the neuropeptide oxytocin, which is increasingly considered the ‘hormone of affiliation’, released in plasma and cerebrospinal fluid in response to everyday aspects of human interaction (Aric Sigman, 2009, p,17).

“A study at the University of Chicago, using electro-physiological measures associated with REM and Non-REM sleep, found that loneliness predicts sleep efficiency – lonely people sleep less efficiently and spend more time awake. The authors conclude that sleep deprivation has profound autonomic, metabolic and hormonal effects and that this may account for differences between socially-isolated and connected individuals in morbidity rates. Poor sleep is now strongly linked to a wide variety of deleterious consequences. ” (Aric Sigman, 2009, p. 17) 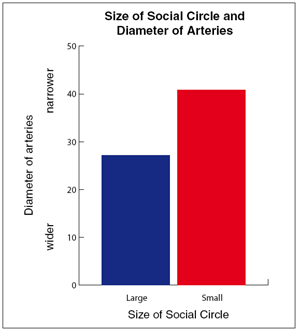 Przybylski, Andrew K. and Netta Weinstein (2012), “Can you connect with me now? How the presence of mobile communication technology influences face-to-face conversation quality”, Journal of Social and Personal Relationships 30(3) 237–246, retrieved at on http://spr.sagepub.com/content/30/3/237.full.pdf+html 28/12/14

Turkle, Sherry (2001), “Alone Together: Why We Expect More from Technology and Less from Each Other”, New York: Basic Books, 2011

1 thought on “The biological implications of Electronic media use”

This site uses Akismet to reduce spam. Learn how your comment data is processed.